Circe is a retelling of one of the most famous Greek myths — The Odyssey — from the perspective of one of its villains. In this novel, the title character narrates her story from the beginning of the world through the rise and fall of classical Greece.

pharmaka: drugs, medicine, or poison
apotrope: magic against evil
labrys: an axe with two blades; the symbol of Crete
pithoi: large storage containers (similar to vases or urns) for grain, oil, wine, etc.
katharsis: a spiritual or emotional cleansing
hubris: the sin of pride
aegis/aigis: a shield, often with a design representing the bearer
outis: “nobody” or “no one”

A Very Brief and Simplified History of Ancient Greece

The period of time that we mean when we refer to Ancient Greece actually spans about three millennia (from about 2600 BCE to 500 CE). During that time, there was not a single, stable culture and political system; rather, there were a number of different eras, which play a role as the settings of Circe. 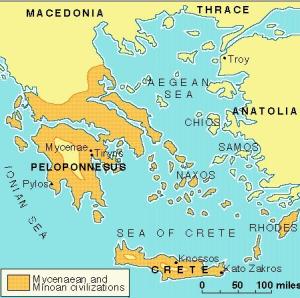 1 – Minoan Greece was the period from 2600 to 1600 BCE, and the center of political and economic power was the island of Crete. (It is called “Minoan” because of King Minos, who makes an appearance as a character in the book.) This little island was able to dominate its neighbors because of the skill of its sailors, who traded all across the Mediterranean and the Middle East and then used that wealth to become even more powerful.

The Minoans also invested their wealth in the building of an elaborate palace in their capital city of Knossos. At the time, this was a spectacular architectural innovation, as it allowed many people to live in close proximity to one another and develop a sophisticated culture. 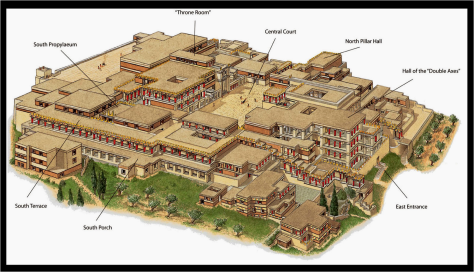 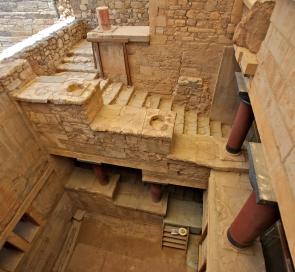 (Above: a diagram of what the palace at Knossos would have looked like, and a picture of the ruins today; you can see how, to a person living 4,000 years ago, the palace might have appeared to be a labyrinth.) 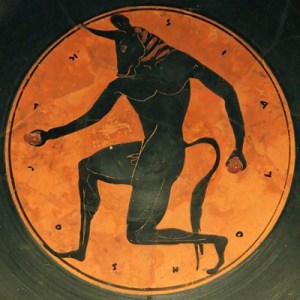 We can see some of the true history of Crete embedded in the island’s most famous myth, that of the Minotaur and the labyrinth. Crete was only able to demand tribute (in the form of sacrificial victims) from the city of Athens because it was more powerful. And to visitors from other parts of Greece, the palace at Knossos would certainly look like a maze.

Why Minoan civilization declined is something of a mystery; some archaeologists believe that an enormous volcanic eruption was the cause. Regardless, by Minoan Greece gave way to our second major Ancient Greek civilization – Mycenaean Greece. 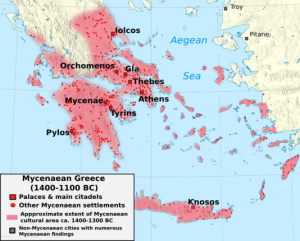 2 – Mycenaean Greece refers to the system of city-states, or kingdoms, that arose on mainland Greece from about 1600 to 1100 BCE. You might have heard of some of these city-states: Athens, Thebes, Sparta, and Mycenae, which was the most powerful among these and lends its name to the era. 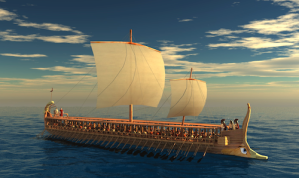 The Mycenean Greeks adopted the Minoan system of a centrally-organized palace and an economy based on lots of trade. They invested their growing wealth into developing military infrastructure, and soon they were at war with each other and with civilizations beyond Greece.

The Trojan War is the story of these city-states coming together (led by Agamemnon, the king of Mycenae) to sail across the sea and fight the Trojans in modern-day Troy. Although the Trojan War was dismissed as a mere myth for centuries, archeological research indicates that there really was a historical war between Greece and Troy at around this time. 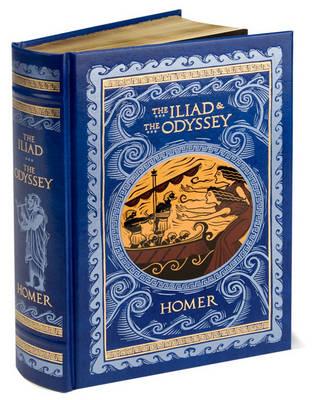 In around 1100 BCE, the Mycenean city-states began to collapse; just as with Minoan Greece, archeologists are not entirely sure of the cause of the fall of this civilization. For the next 400 years, Greece entered what historians call the Greek Dark Ages. These societies stopped trading and building significant architectural structures, their artwork became less sophisticated, and most importantly, they lost the ability to write. It was during this era that many of the myths that would become the basis of the great epics of The Odyssey and The Iliad were created through oral storytelling.

At around 800 BCE, the Greeks relearned how to write (although using a different alphabet from what they had during the Mycenean and Minoan periods); the poet Homer took the myths that had been passed down orally and wrote them into coherent, unified stories. 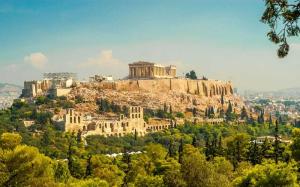 3 – Classical Greece reemerged as a Mediterranean power in about 700 BCE, again under the system of city-states. This time, however, the Greeks began to experiment with a limited form of democracy, in which some male citizens had a voice in the government, as opposed to the monarchies during the Mycenean era. Athens emerged as the dominant city-state and became the cultural and political capital. This era became known as the Golden Age of Greece because of the advances they made in science, arts, politics, and philosophy. Alexander the Great attempted to spread Greek culture through his vast military conquests. Classical Greece fell after the rise of the Roman Empire.

In an even briefer form, here is the broadest possible outline of Greek history:

Weaving plays an important role in both the story of Circe and The Odyssey itself, and it can help us to understand some important things about the lives of women in Ancient Greek culture. 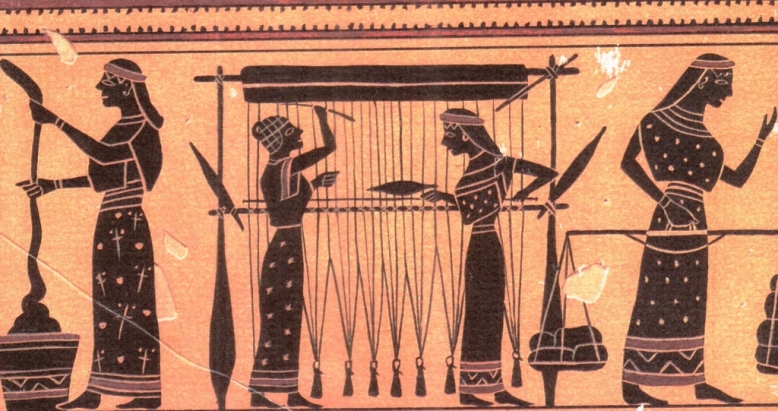 Weaving was, of course, about making cloth, but it also meant a number of other things for the women who practiced it. For most women – the wives and daughters of the laboring class – weaving was necessary to provide material for the household income. But for women who were wealthy, who could pay to have others craft the fabric that they would use for their family’s clothes, weaving became something closer to a form of art; they could take their time in creating tapestries depicting scenes which could be hung upon the walls. In this way, weaving was a form of self-expression – a woman might not be able to write poetry or deliver a speech in public, but she could tell her story through the designs that she wove. 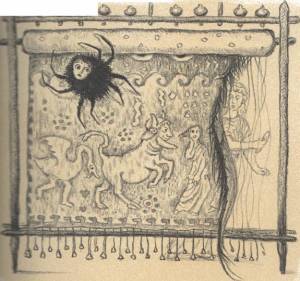 Weaving was so significant to the Greeks that they assigned it to the realm of Athena, who was also the goddess of war and intelligence.

Click here for even more information about women and waving in Ancient Greece.

Check out the descriptions of the characters on Madeline Miller’s website.

And click here to read Miller’s essay on how Circe has been depicted in works of art throughout the ages.